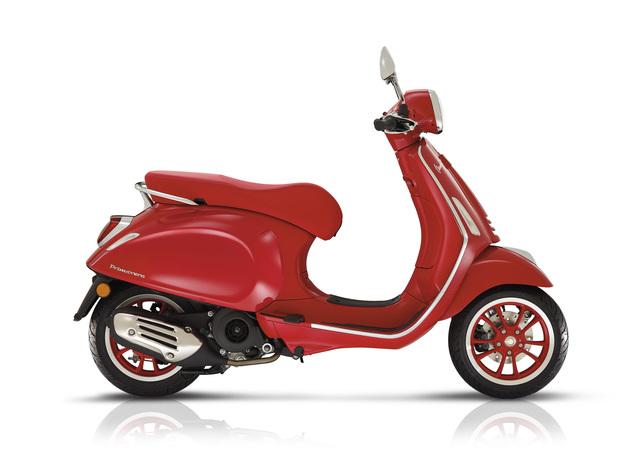 Vespa Primavera (RED) is powered by a modern 125 cc four-stroke single cylinder i-get engine, air cooled and equipped with electronic injection and 3 valve distribution. A remarkably environmentally friendly engine capable of performance at the top of its category. Values that, combined with the proverbial light weight typical of all Vespas, make the Vespa “small body” particularly lively both in city traffic conditions and on the open road.

* Helmet cannot be exchanged for another product or for discount on the vehicle price.

Our prices are unbeatable! please submit an online enquiry and we will get back to you within 24 hours with the best UK deal. All part exchanges taken.

Figures correct at time of print but subject to change. All finance is subject to status and is only available to applicants aged 18 and over. Finance provided by Black Horse Finance, St William House, Tresillian Terrace, Cardiff, CF10 5BH or MotoNovo Finance, One Central Square, Cardiff, CF10 1FS. Please speak to us for full scheme and qualifying model details.

For the fourth consecutive year, the Piaggio Group renews its partnership with (RED) by presenting the new Vespa Primavera 125 (RED) project.

Millions of people and the world's most iconic brands come together with (RED) to participate in an enormous challenge, to definitively beat illnesses such as HIV/AIDS, tuberculosis and malaria. Since its foundation in 2006, the work of Bono and Bobby Shriver, (RED) has contributed more than 500 million USD to the Global Fund for the fight against AIDS. (RED) funds have already had an impact on more than 110 million people thanks to prevention and treatment activities and consultancy and support services, with a particular focus on countries where HIV is often passed from mother to child. Thanks to collaboration with the Vespa for Children programme, the Piaggio Group has also contributed to bringing (RED) and support for the Global Fund to India, one of the countries most affected by the problem.

This year, the star of this charity initiative, such an international success since its birth in 2016 thanks to the iconic status and popularity of the partners involved, is Vespa Primavera, a true style icon and a legendary name in the Vespa story.

Born in 1968, Vespa Primavera today embodies all those values ​​that made it so successful more than half a century ago. Young, innovative, technologically avant-garde, agile and dynamic, and environmentally friendly, today's Vespa Primavera is a star of its time, inheriting the freshness and joie de vivre of its progenitor.