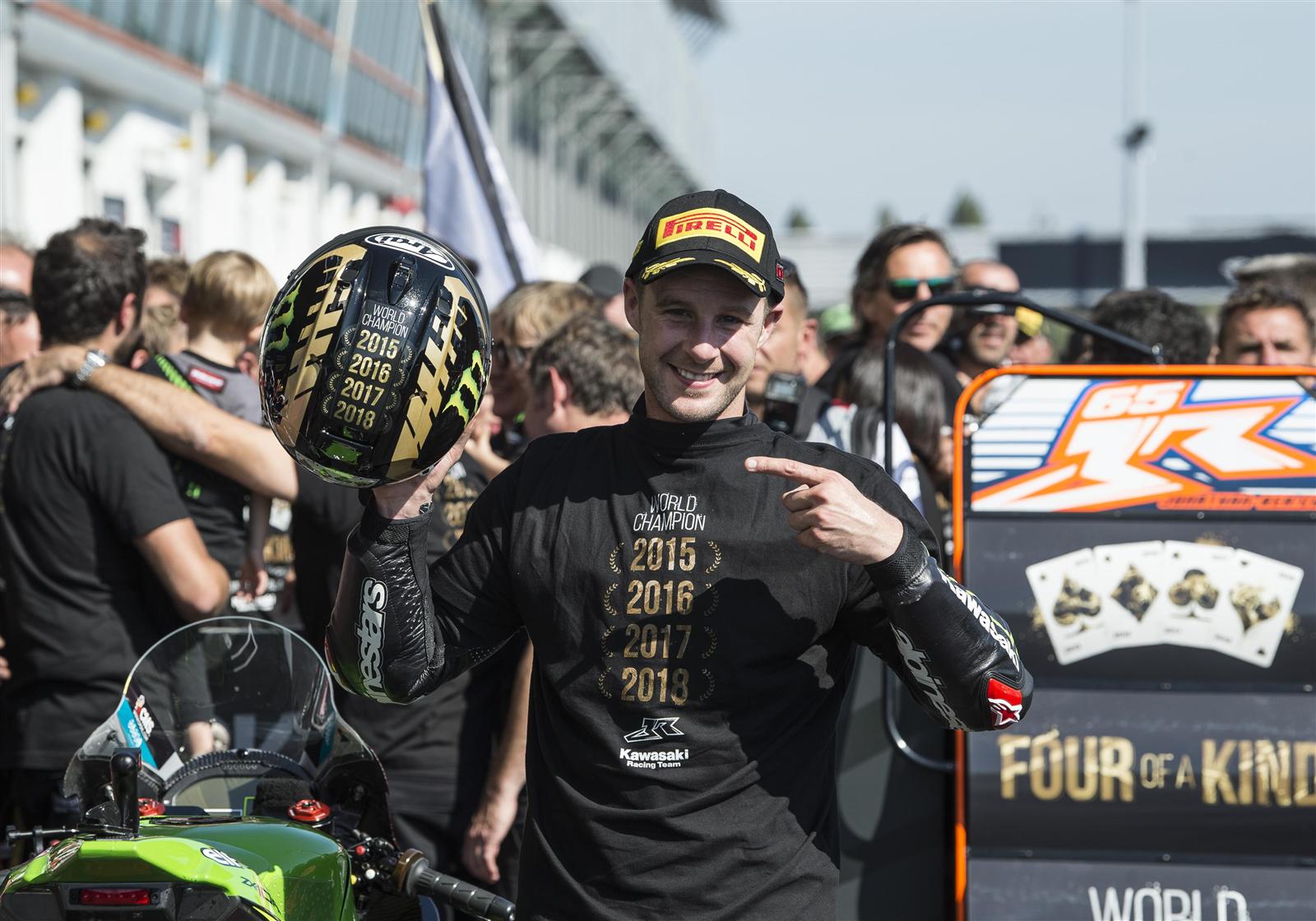 Jonathan Rea (KRT) secured a famous fourth FIM Superbike World Championship title at Magny Cours today by winning his 13th race of the season on his Ninja ZX-10RR. Rea is the second rider to have won four WorldSBK titles, but the only rider to have won four in succession. Tom Sykes (KRT) was a strong second in the 21-lap race, having earlier set a new track record while earning his 47th career Superpole win.

With Sykes and Rea 1-2 after Superpole, and both well under the existing lap record, the KRT duo took the race to their competitors from the startline. Rea passed Sykes early in the race, into the Estoril corner, and he ran up front from then on, sometimes at lap record pace. Rea set a 1’37.152 on his eighth tour of the 4.411km circuit to score his new lap record.

Rea’s win gave him 130 podiums in WorldSBK, bringing him level to the all time record, which he now shares with Troy Corser.

On the slowdown lap Rea celebrated his championship win with a game of cards against three of his own ‘alter egos’, wearing his racing suits and crash helmets representing each of Rea’s championship winning season with KRT, from 2015 onward.

Sykes, who has now recovered well from a training injury in the long summer break, pushed as hard as he could to stay in contention with Rea. He had to settle for second place after almost losing the front more than once, but recorded his first podium since Brno in July.

In the current championship points, Rea has 445 points, Chaz Davies 315, Michael van der Mark 293 and Sykes 260. One more race remains at Magny Cours, on Sunday the 30th of September.

Jonathan Rea, stated: “It is absolutely incredible to win four. Sometimes even after winning back-to-back championships, or three in a row I have to say it is hard to find words to speak about what you have just done. It is like we are riding the wave now with our Ninja ZX-10RR, with incredible people around me. Whilst I always dreamed of being in this position I never thought it to was realistic. It was so fitting that Guim, the team manager, allowed my dad to come and collect the team award on the podium. I got really choked up when he came up because it just reminded me of growing up in Northern Ireland and travelling all round with my parents to motocross races. Then getting my first pro ride in roadracing, and my parents letting go. But they have always had my back. So that was super-nice. Pere and my team gave me a great bike this weekend and the target was clear. We have been in this position before, so there was no kind of nervousness or anxiety around, it was really positive energy. On track Fabien has been analysing what we can do and the team worked super-hard all weekend to get the best out of the bike when the tyre was dropping. In the hot conditions, at the end of the race, that is what we worked towards today. The feeling with the bike just kept coming and I was able to knock it off on the last lap and take it all in. I was aware of the crowd there and what I was about to achieve so that last lap there I thought about winning the championship. It is incredible, and incredible journey.”

Tom Sykes, stated: “Not a bad day but I am slightly disappointed that we suffered a little bit during the race. I settled into a good rhythm but when I wanted to attack, we missed it. I have spoken to the boys and I think we know what it is. I certainly enjoyed that race. When I tried to push I lost the front a couple of times. I am happy with the way the race went today, with this in mind. I am excited and motivated for tomorrow. I think we can improve our set-up a little bit. We need to start from the third row so it is all about a little bit of aggression. Today is a day for Jonathan Rea. He has had four fantastic years, kind of flawless years, and he has pushed very hard and made a very good job. Congratulations to him, his family and his side of the garage. Tomorrow we will have a go and try to win.”