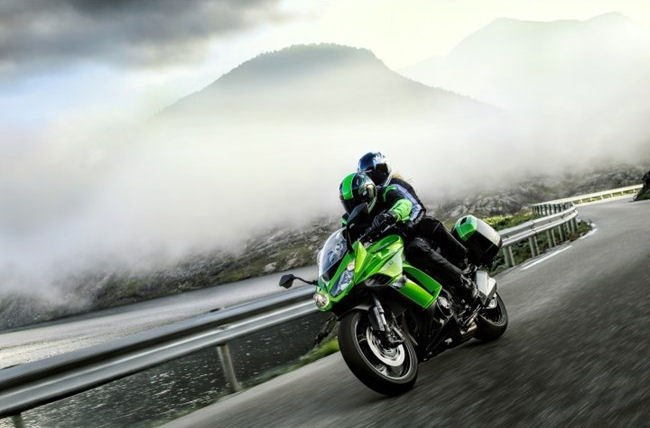 Appealing to former supersport riders as much those looking for a touring machine with genuine all-round credentials, the most noticeable visual feature of the incoming Z1000SX is the new, bespoke designed colour-coded optional pannier system – with each of the 28l panniers able to hold a full-face helmet. Designed to hug the centre line of the machine, the combined mounted width of the new panniers is just 925mm.

Featuring a new mounting system which ensures the machine is as stylish with the panniers in place as when naked, another advantage is the convenience of the “one key” system with both ignition and luggage operated by the same key.

With a host of rider upgrades, the latest Z1000SX benefits from a suite of new technology including Kawasaki’s highly praised KTRC electronic traction control system. With three traction modes to choose from, including those covering sports riding or even low grip situations, the traction control is further complemented by two rider selectable power modes.

Kawasaki’s renowned engineering expertise has also been brought into play regarding the engine itself with a variety of amendments and upgrades which focus on more instant and responsive power delivery.

In terms of the chassis, the Z1000SX benefits from updates at both ends with revised settings for the 41mm front forks and, for braking duties, a radial-mount master cylinder operating new Tokico monobloc calipers grabbing the characteristic petal front rotors – with the option of ABS - taking braking levels truly to Supersport levels.

For the rear, the shock absorber now features a remote adjuster allowing riders to fine tune the rear suspension of the machine allowing for both the increased weight of passenger and luggage or to refocus when required on a solo sporting ride.

With greater riding excitement promised for the coming year, the aural pleasure will now also be heightened thanks to a revision of the air-box and clean air system promising a distinctive Kawasaki “intake howl” when accelerating.

Commenting, Mr Yasushi Kawakami, Managing Director of Kawasaki Motors Europe, applauded this next step for the popular Z1000SX: “With such a wide appeal, the Z1000SX has already gained many fans from both supersports and touring backgrounds. With so many additional features for the coming season we are sure it will retain its commanding position in the sports/touring market”.