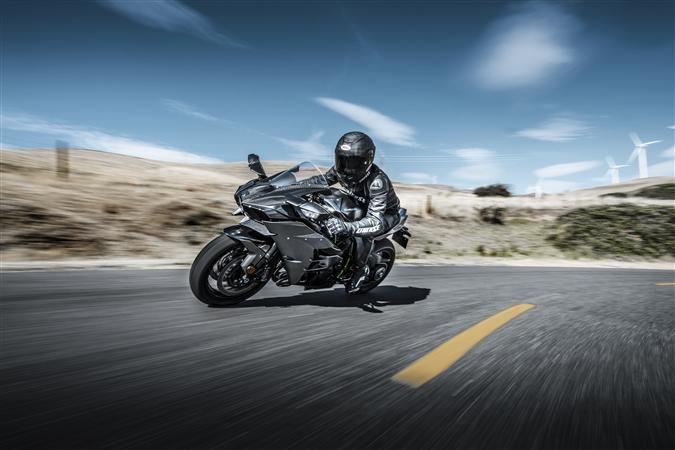 The existing highly acclaimed Supercharged Ninja H2 and Ninja H2R machines are now joined by a third even more exclusive model in 2017, the Ninja H2 Carbon.

Limited to just 120 available worldwide in 2017, the Carbon model of the Ninja H2, as its name suggests, features a Carbon Fibre upper cowling as well as other features that mark it out as special – even in this illustrious company.

Resplendent in a new paint scheme that is just as eye catching yet different to the two existing Ninja models, the Ninja H2 Carbon also has a new take on the famous Kawasaki “river mark” emblem on the front of the cowling as well as the adoption of an IMU offering six levels of machine attitude measurement.

Using the IMU at its core the range of electronic rider aids is impressive with Kawasaki’s cornering management function as part of a suite that also includes traction control, launch control, intelligent anti-lock brakes and even a bank angle readout as part of the meter display.

Equipped with its stunning trellis style frame, handling and braking are dealt with by top quality components on the Ninja H2 Carbon with KYB AOS-2 front forks plus Brembo M50 calipers and braking package while, at the rear, a top spec Ohlins TTX shock absorber with remote adjustment ensures perfect handling.

Sure to be popular not just for its rarity value but also for its awesome performance, the old saying was never more pertinent for the Ninja H2 Carbon, “be quick or it will be gone!”…