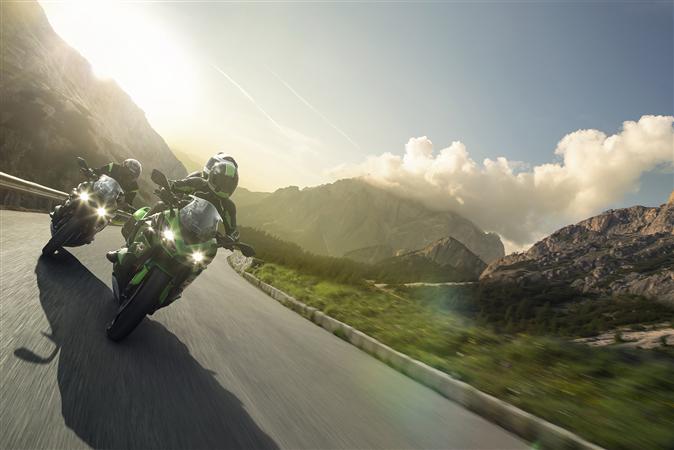 As leader in the litre class sport touring segment it single handedly created, the Kawasaki 1000SX has been a sales success story since its inception with strong media reviews and a huge number of loyal fans.

For 2017 Kawasaki has fundamentally reviewed the overall SX package and refined both its sporting and touring prowess creating a machine that is equally rewarding in a committed sports riding environment as it is with luggage and passenger over a long distance.

Customer focus groups and research conducted by Kawasaki in Europe have guided the engineering and styling processes that led to the new machine boasting a wider cowling and larger “double-bubble” adjustable screen as well as LED headlamps that are 1.4 times brighter than the current machine.

Ergonomically both rider and passenger seats are more deeply padded with a new style foam plus sculpting which more effectively anchors the passenger in position. With the addition of the clean mount pannier system and the retention of remote rear-pre-load adjustment focus on touring over long distance while other additions compliment the SX’s considerable sporting prowess.

New for 2017 is the addition of an IMU monitoring 6 levels of machine attitude and delivering a raft of electronic rider aids include a cornering management function, intelligent antilock braking, selectable power modes and traction control.  Allied to the easy pull assist and slipper clutch the world of the SX rider is a comforting place to be.

From a sporting perspective, the 2017 machine enjoys new suspension settings and sporty Ninja family styling. The sporting theme runs through to the meters with a digital gear position indicator and an adjustable gear shift light that illuminates both in the meter panel and via an illuminated rev counter needle.

The latest Z1000SX has been created to go the distance and remain at the top of its class despite the entry of several competitors in the past few seasons. Its 19litre fuel tank and Eco riding indicator ensure that fuel stops are rare while an external temperature readout allows the ride to monitor changing conditions. For the coming year, the Z1000SX most certainly comes once more equipped with the power to move you.