First to show its face was the entry level model Z300, a wild-side brother to the successful Ninja 300. Sharing the same chassis and twin-cylinder Ninja engine with its sibling but with the aggressive “Sugomi” styling of the flagship Z1000, the UK spec bike will be sold in ABS format only. 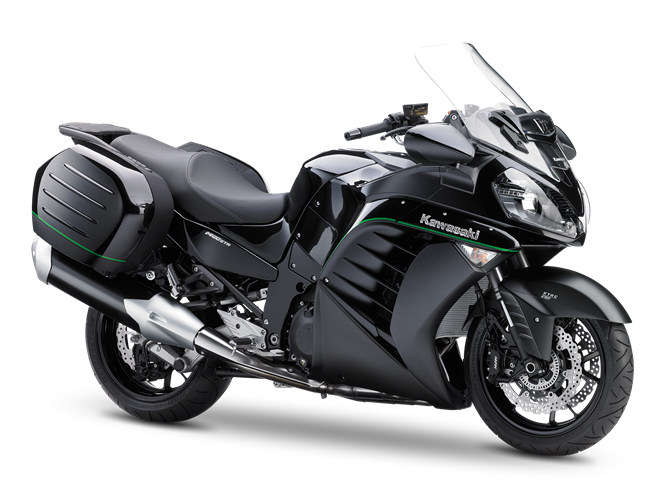 Highlighted too was the 1400GTR, with lots of technical updates to the chassis and engine, the aim was to fine tune the long distance comfort. The current model is already the weapon of choice for long hours in the saddle at the Tour de France and with Police forces throughout the UK and Europe.

Enhancements to the rider comfort are visible with a new sculpted seat giving better ground reach for the rider and a wider flatter pillion seat. The eagle-eyed will have spotted the new screen, designed with a three position directional vent, this eradicates low pressure areas in the cockpit and provides a smoother flow of air over the riders helmet. 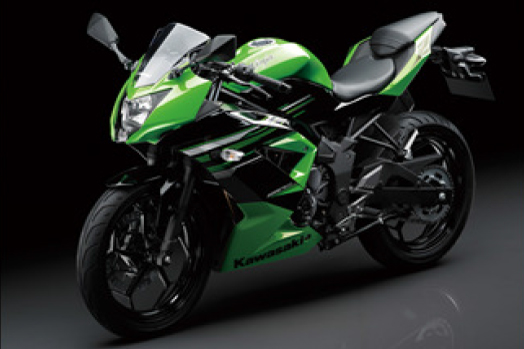 New Kids on the block were the Ninja 250SL and Z250SL. With the “SL” moniker standing for Super Light, it’s no surprise as these all new single cylinder bikes weigh in at just 151kgs and 148kgs respectively. Remember that’s fully “wet”!

The ride on these “Trellis” framed bikes is fun, responsive, but above all easy to handle. Perfect for any riders first taste of a Kawasaki Ninja or “Zed”.

Following the huge media interest surrounding the recent preview of the stunning Ninja H2R Supercharged track-only motorcycle, in a manic flurry of camera flashes, we have now taken the covers off the street focused Ninja H2 model. With the vast majority of engine and chassis components common to both machines, the road-ready Ninja H2 has been creating massive interest. 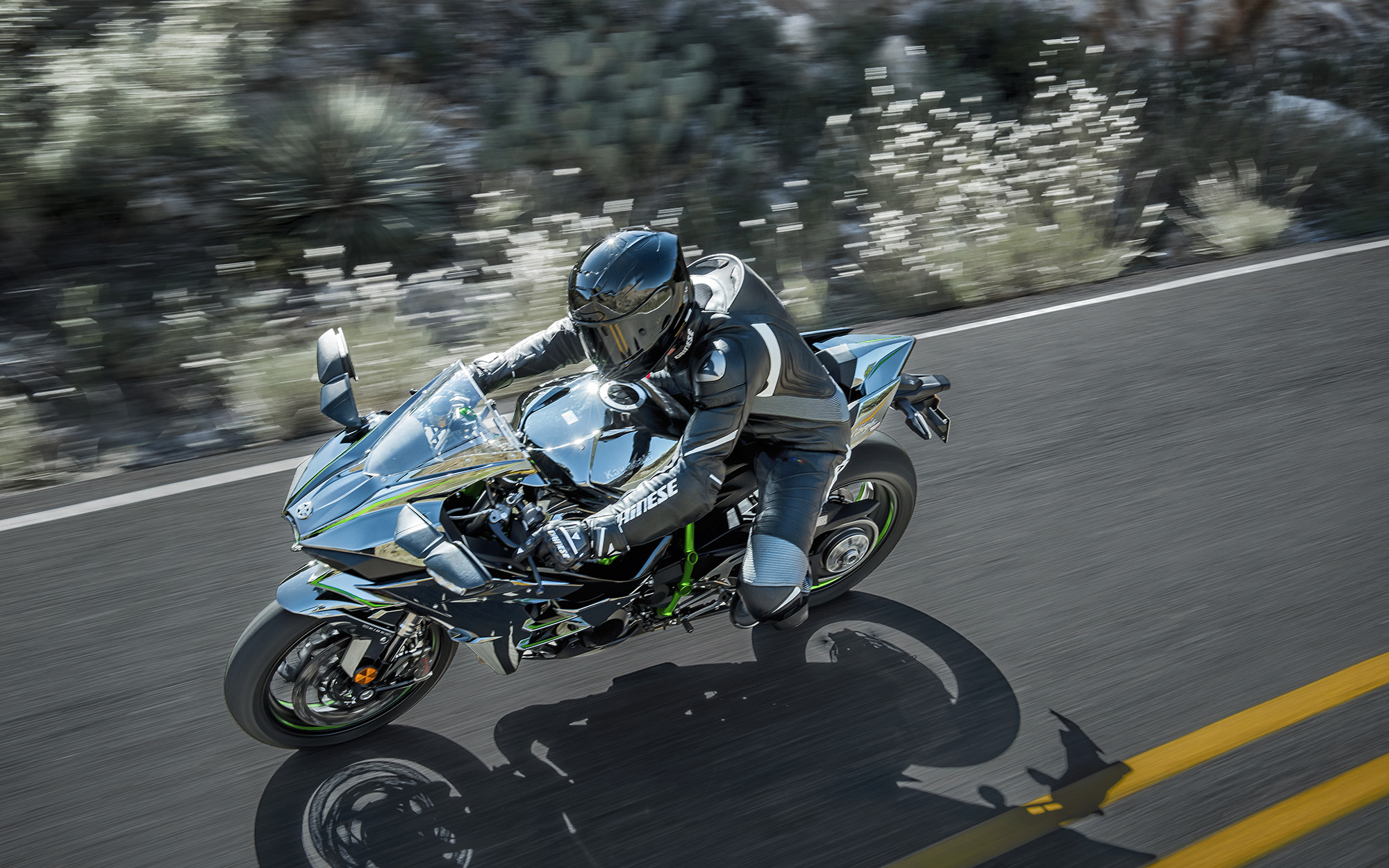 Using an entirely “in-house” designed and constructed centrifugal type supercharger, the Ninja H2 and Ninja H2R are the result of cooperation between some of the major business areas of Kawasaki Heavy Industries including the Aerospace, Gas Turbine and Corporate Technology divisions. Not bound by design or engineering limitations, the company first show-cased the concept of a supercharger at the Tokyo Motor Show. Now the idea has become reality with the launch of both machines at Milan’s EICMA show featuring many engineering and technology innovations with the focus very much on a craftsmanship-led look and feel.

With a power figure rated at 200PS for the Ninja H2 and 310PS (yes 310!) for the Ninja H2R, each machine is capable of class leading levels of Supersport performance. Delivering phenomenal acceleration across the power range from tick-over to the red line, the supercharger has been tuned to offer the widest spread of available urge at any revs and in any gear. While a host of electronic rider aids such as KTRC traction control, advanced KIBS anti-lock brakes and even switchable engine braking functions, create the ultimate environment in which to enjoy each supercharged Ninja. 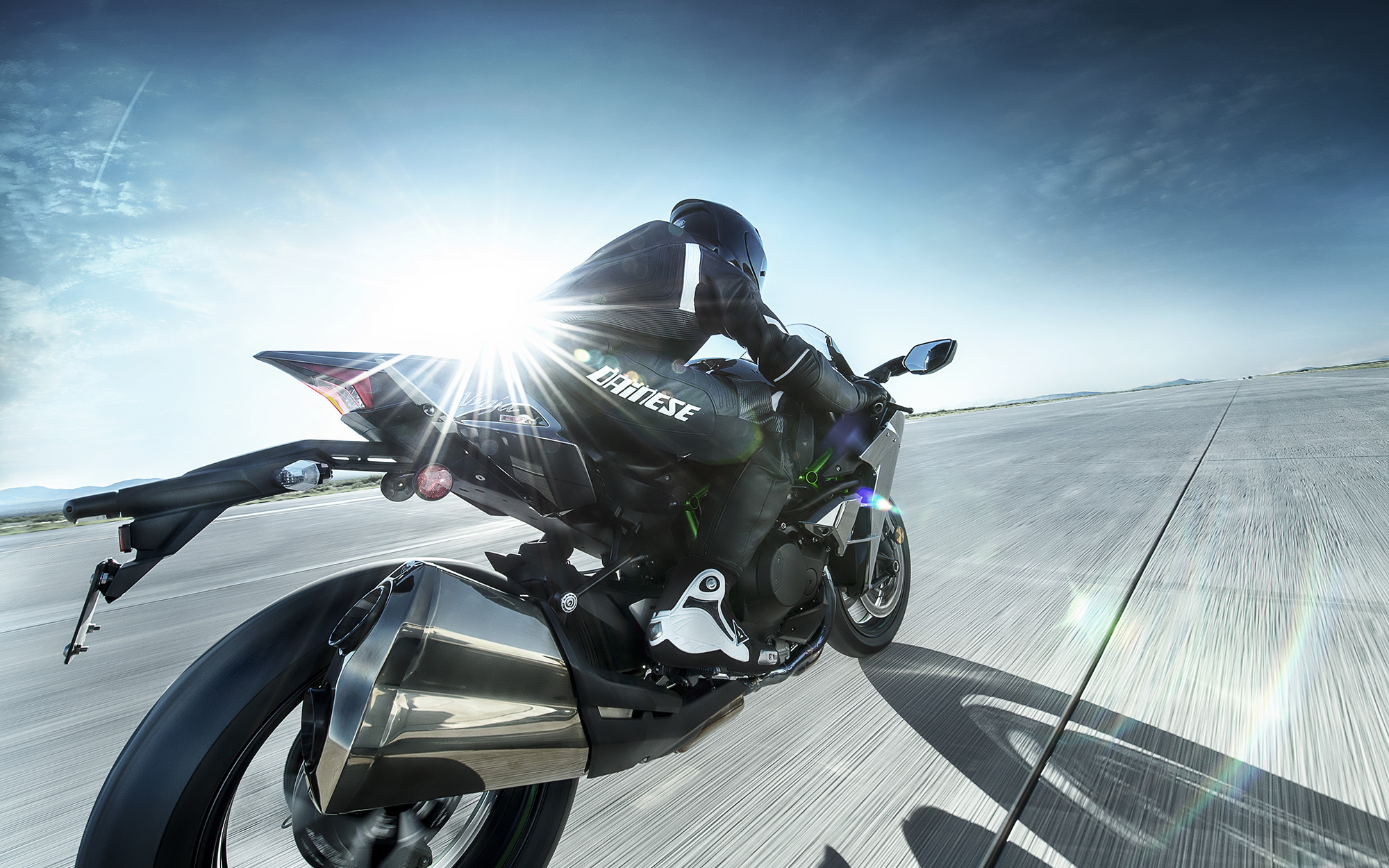 A quick glance at the specification sheets reveals a list of components and design features that underpin the high quality approach to the creation of the Ninja H2 and Ninja H2R. In terms of firsts, there is a formidable list including KYB AOS-II Air-Oil separate inverted 43mm front forks and dog ring transmission - both only previously used on racing machines. Equally, the exquisite and complex single sided swinging arm is a first on any Kawasaki production motorcycle along with items such as KEBC engine braking control, the KLCM launch control feature, the use of an electronic quick-shifter plus, on a more visual level, the incredible Mirror Coated Black paint on the Ninja H2 the result of an induced chemical reaction that creates a layer of real silver as a base coat. For the track-only Ninja H2R, the wide use of carbon fibre not only saves weight but creates the look and feel of a stealth aircraft.

The quality of design and components does not end there; in fact it is just the start of the process which Kawasaki refers to as “craftsmanship-led”. As series production motorcycles, each Ninja H2 and Ninja H2R are created from start to finish in a dedicated area only for these machines at Kawasaki’s famous Akashi factory in Japan. In an area of the facility set aside for construction, craftsmen create each supercharged machine ensuring the highest levels of quality control. Incorporating numerous craftsmanship details such as specially manufactured fixings, new welding techniques for the innovative trellis style chassis and the adoption of top end quality Brembo braking and clutch operating components, both machines in the Ninja H2 stable are destined to be coveted by potential owners and
sought after by discerning enthusiasts across the globe.

Is that all...No! In the UK the road going Ninja H2 will be supplied with the latest specification Akrapovic as standard. As you would expect with any component chosen to adorn the Ninja H2, the quality of the craftsmanship has to be seen up close to be appreciated. 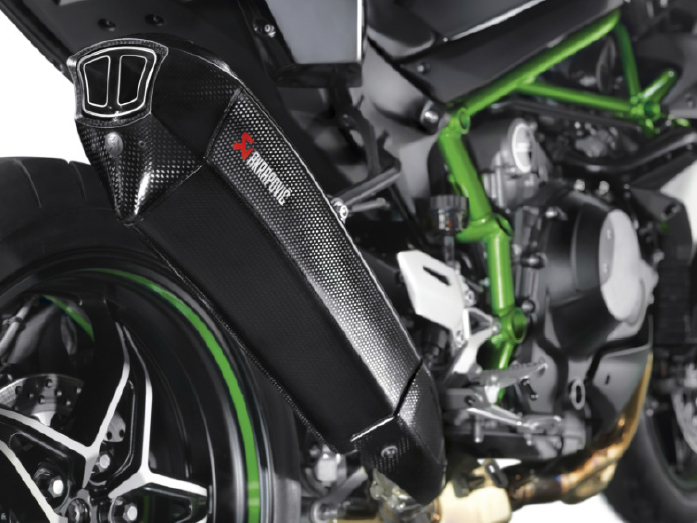 Let’s remind ourselves of what’s new for 2015 in the Kawasaki Range.