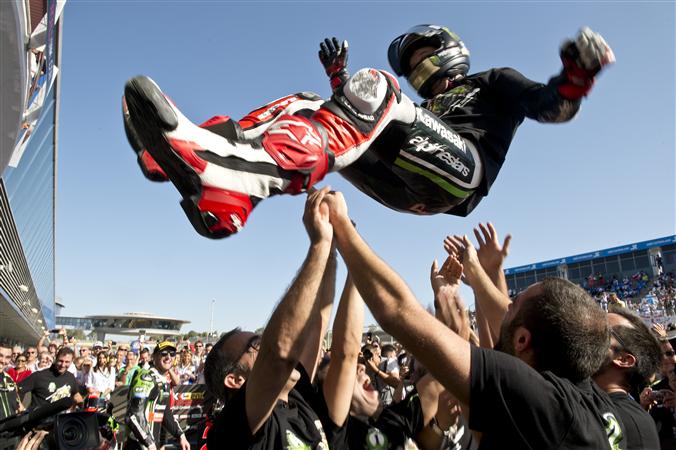 After finishing fourth in the first WorldSBK race at Jerez de la Frontera in Spain Jonathan Rea (Kawasaki Racing Team) became the FIM Superbike World Champion for the first time in his career.

Born in Northern Ireland in 1987, Jonathan only joined the Kawasaki Racing Team for the 2015 season, after taking part in his first full WSB season in 2009.

He made an immediate impact on the Ninja ZX-10R in winter testing and won the first race of the year for Kawasaki, at Phillip Island on February 22nd. He won 12 of the first 20 races, and has not finished off the podium in any of them, before arriving in Spain to lift his crown.

A Q&A with Jonathan follows, below, plus some of his remarkable facts and statistics and comments from Kawasaki and his KRT team.

Q: What does it feel like, personally, to have a year like this, especially after having been in the championship for such a long time?
JR: Personally, it feels like a little bit of a weight off my shoulders. I have always believed that we were capable of winning a world championship right after I had stepped off a World Supersport bike onto a Superbike. Now, in this moment, it just feels like my time to be honest. It feels a bit like everything has gone my way a bit, even when a couple of things could have gone wrong. Like when the rain came in Portimao and I had a slide with the front in the wet, and caught it on my knee. When I had a big moment at Donington in lap one, and I landed straight back on the seat again, and was able to pick up a second place…
It has just panned out for me so smoothly. I have never had that happen before. I have been in Superbike quite a while and I have had two seasons that were dogged with injury, with my wrist and a femur issues in 2011 and 2013.

Q: How special has this season been after all that earlier frustration?
JR: The most special thing, really, is not just right now where we are, and in the position we are now in. It was joining Kawasaki and a team that had been so successful over the past few seasons, sharing a garage with one of the strongest riders in World Superbike. To come out and win the first race at Phillip Island… that is a feeling and memory that I will take with me for a long time. That felt amazing so from that point on every weekend - where even if we couldn’t qualify on the front row, or even the second row – because we have qualified in seventh or eighth position, we still won quite a few races. It is a testament to all the hard work that not just Pere Riba my crew chief, or Paolo Marchetti my electronics guy, but all the mechanics put into making sure we have a package on Sunday that works. It is proof that the Ninja ZX-10R is, if not the best one, then certainly one of the best packages right now on the grid.

Q: When you are riding at race-winning pace it looks like it is smooth and easy – although, of course it is never easy. What is it about that bike that helps with that, to make it look so smooth?
JR: I also felt that my previous bike fitted me quite well but the development from the KHI side, that our electronic guys Paolo and Danilo do, from the ECU side and engine management, there is no doubt we have the best electronics on the grid. And the two best electronic engineers – not just in our paddock but in the world – inside our box. Those are two massive factors to make the bike good. Then from a chassis point of view the bike just turns so well. I think the positive thing of developing and using Showa suspension is that we have got 100% of their attention. Now the Showa suspension and the way we are working with us has given us an incredible platform. They have shown that they are really behind it. By them solely working for us we have made massive gains.

Q: Coming from a racing background, and knowing that a lot of good riders will not get the chance to be world champion, does that make this year even sweeter to your?
JR: Anybody that has won a championship has not just arrived in that one championship. Everyone has faced adversity and hard times, and come a long way. But since I have been five years old I have been competing in schoolboy Motocross. So I feel like I have been riding competitively for such a long time. I came into the world championships at 20, quite young, but I feel like I have been racing bikes competitively for years and years, so I feel like it has taken me a little longer to achieve that goal. The good thing about it is that as a kid with a dream, I never gave up on my dream. I just kept believing in myself. It has been all nice and ‘limelighty’ at times, but there have been countless hours and days and weeks spent in hospital rooms or physio rooms or with trainers. I feel like I have faced enough injuries already so it also feels nice to have a season like this because it certainly makes up for the hard times that nobody really sees.”

Steve Guttridge: Kawasaki Race Planning Manager: “Bringing Johnny into our Kawasaki Racing Team this year was like a dream come true. He's delivered everything we expected on the track and much more as part of the team. Racing alongside Tom, it is a dream team and we really have to thank them both for their efforts to deliver these good times with Kawasaki.”

Guim Roda: KRT Team Manager: “I’m so happy for Rea and of course for all the Kawasaki family and all our sponsors, especially Motocard, Elf and Monster. What Johnny completed today is really great and we all have to be proud. Rea has worked all the year close to excellence and this is very difficult to achieve. He proved he is not only a fast rider but also a solid and consistent one. We are happy he found in his Ninja ZX-10R the tool he needs to show his potential. What he found in combination of his mechanics and his crew chief Pere Riba has been great, all done within not even a full year. I cannot wait to see him on the 2016 bike. We cannot forget the great job Tom Sykes did, and is still doing too. He did not start the season so well but now he is getting really strong too. We really wish he can take second place in the championship and that would be something for us all to be proud of too.”