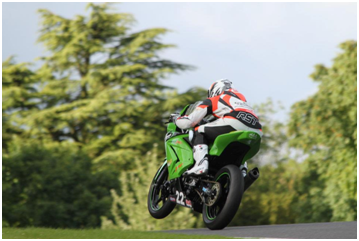 The bank holiday weekend saw some fantastic results for the young Colchester Kawasaki rider at Cadwell Park. The most recent round in the Ninja 250 championship was run alongside the British Superbikes so Mason was looking to impress and he certainly did so, starting off by putting in some fast lap times in qualifying leading to a second place start on the grid for race 1.

Mason was pumped before race 1 after seeing the crowd that had turned out for Sunday’s antics. Andrew Pitt, ex-MotoGP rider, WSBK rider and dual World Supersport Champion, gave Mason a last few words of advice before heading out onto the grid. A dropped gear lead to difficult start on the narrow track, however Mason clung onto second place into the chicane. The leader had built up a 4 second lead but Mason gradually closed the gap, finally reaching tire touching distance as he made his move at his favourite passing spot in the chicane, pushing himself up the inside to take the lead. Law pushed right through the last, taking the win and the ninja 250 lap record at the same time.

Overcome with emotion, he experienced such a great reception from the crowd lifting his already peaking spirit. Mason said, “That had to be the best win I have ever had; having to fight for it that way made it so much better. I feel like I have my mojo back!”

Mason started the second race of the day from pole position, giving him a great start and first place into the first corner. A few riders went down in the second corner, but Mason racked up a 5 second lead from the rest of the pack and took 1st place again for the second race. “Seeing my pit board telling me I was pulling away every lap by 0.7 is such a good feeling,” said an elated Mason.

Race 3 took place the next day on the bank holiday, making it the biggest crowd that Mason had ever raced in front of. Mason said, “This is so exciting and I can’t wait to get out on track!”

Mason once again started from pole position and got an outstanding start at immediately, riding tactically and blocking any possible routes for fellow racers to try and pass. Mason had complete control of this race and lead it from start to finish. “This weekend has been the best weekend of my life and I would like to thank MSS Colchester Kawasaki, Motorcycles Direct/Lids Direct, RST leathers, Shark helmets, VBS for the awesome paint work, Andrew Pitt, my Dad, Peter Eccles for the fantastic training, Dick Sheppard for letting me work out of his awning and also everyone that has supported me through this season so far,” said Mason.

Mason is now leading the Ninja 250 Championship and is hoping to continue his dominance in the final two rounds. The next race will be at Snetterton on the 8th-9th September.