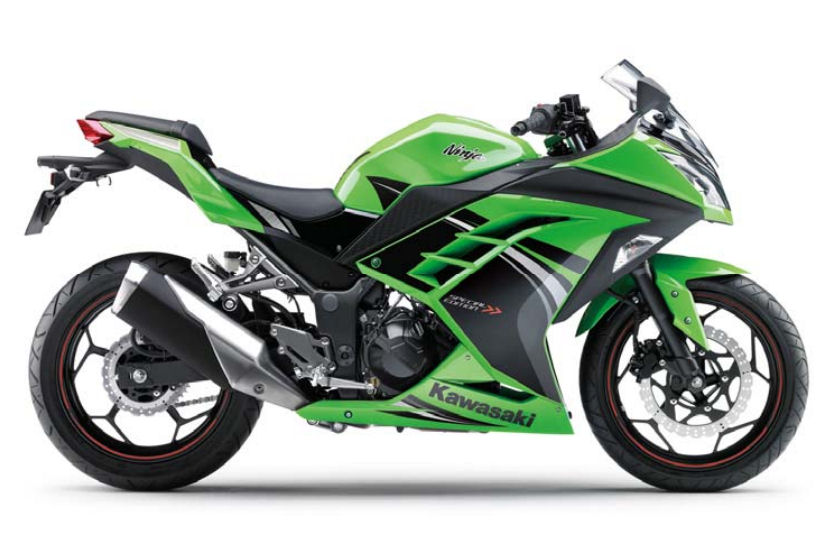 The Ninja 300 range will get the “Special” treatment in the form of Ninja 300 SE version.

Based on the current twin-cylinder, water-cooled Ninja 300, the Special Edition stands out from entrylevel competitors thanks to a World Superbike inspired bodywork graphic package and colour-coded wheel rim tapes.

Featuring the by now famous “elliptical” graphic style of the machines ridden to the top step of the podium by Kawasaki WSBK stars Tom Sykes and Loris Baz, the Ninja 300 Special Edition will be available in standard and ABS equipped versions.

Arguably the flagship of the Kawasaki range, the ZZR1400 will be available as a Performance Sport model with bespoke Öhlins TTX shock absorber and Akrapovic lightweight titanium silencers plus “Bubble” sports screen.

With its patented concentric twin-tube design, the Öhlins TTX shock – complete with easy to adjust remote pre-load adjuster – separates the compression side of the main piston and rebound valve delivering the possibility to completely separate the adjustment for each function for a high degree of suspension compliance.

Having 22 possible adjustments for both damping and rebound, plus high quality components in its construction, the TTX shock fitted to the ZZR1400SE is a joint development between the two companies and promises to deliver increased rear stability, riding comfort and an even more “planted” feel.

The bike also gets styling upgrades to the front top caps that are laser etched gold alumite and a jaw dropping paint Golden Blazed Green and Metallic Spark black scheme.

Stocks of the ZZR1400 ABS Performance Sport and Ninja 300 SE will be limited and will therefore be on allocation via your Regional Business Manager. The first shipments are due mid-October and we will of course confirm pricing ahead of release.